I came across these lovely crochet flowers on one of the blogs I follow and was fascinated by them. The colours go so well together and every flower looks different and absolutely lovely. I've never crocheted before except the mandatory oven gloves I had to do at school, so I thought I'd give it a try. I ordered some books of Amazon and had a go at different designs: 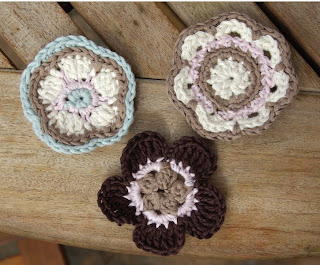 Nothing compared to those on her blog, I know, and not the most vibrant colours on earth, but I'm still trying...:-)
Posted by Nicole 3 comments

I desperately need to work on some boys clothes for the shop and next craft fairs, and this is the first one finished. The pattern is MIKA from Farbenmix and the fabric Denim Africa. 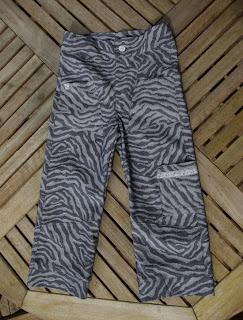 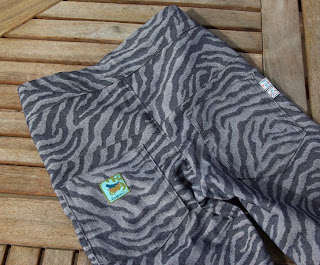 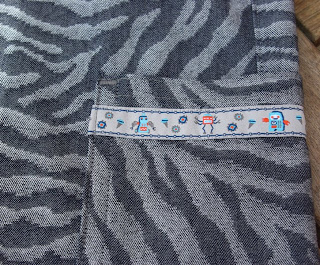 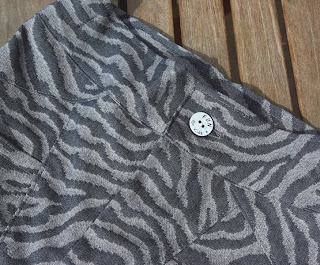 Available in the shop here.
Posted by Nicole 2 comments

The summer seems to have finally arrived in Scotland and we've started our big summer sale. This seasons fabrics are reduced up to
40%!
Printed cottons, jerseys, checks, dots, stripes, everything on offer can be found here.
Posted by Nicole 0 comments

I couldn't resist these lovely toadstools 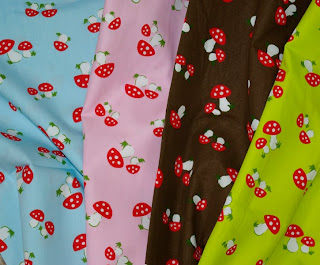 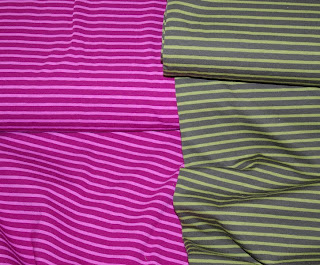 All available in my shop now.
Posted by Nicole 2 comments

I'm sorry to inform you, but this weekend's craft fair at the Caird Hall in Dundee has been cancelled. I received an email this morning saying due to a few cancellations there aren't enough exhibitors for this show. This is something that happens and I can totally understand the organizer in his decision.
What makes me VERY angry is, that they now have cancelled all planned shows in this venue, because Dundee City Council doesn't permit them anymore to put up their banners and promotional stands outside the hall on the day!! How are people supposed to know about events if no advertising is allowed??? This craft fair was always very well attended and even attracted people from outside Dundee. And it was a great opportunity for small, local businesses (like me) to display their work and sell their products. No wonder that the set-up of new businesses in this area is on the decline. Well done, Dundee City Council!
Posted by Nicole 1 comments

New skirts for me

Pattern Langeness from Farbenmix. Perfect fit. Just for me. My colours. Love them. 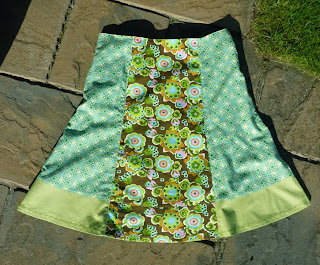 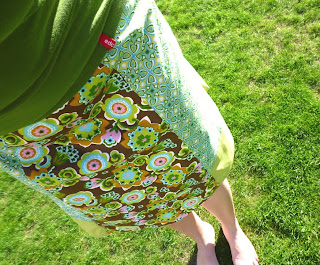 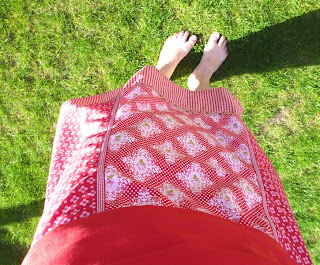 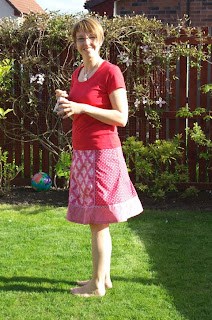 Have you ever been on Jury Duty? I hadn't, never actually thought about it, until I received a citation a few weeks ago, saying I was asked to attend court on Monday, 7th of June, but to phone the day before if I was really required. So I phoned on Sunday night, listened to the lady's voice on the tape, phoned again, listened again, thought I'd understand what she was saying but asked Alan to phone again just to make sure. He had to listen to it twice as well.... why can they not record someone with a clear voice saying simple sentences?? Anyway, the message was I didn't need to attend that day, but should phone back on Monday night if I was needed on Tuesday. This time the message was clear: Tuesday morning 9:45. Ok, I was there on Tuesday as requested together with 36 other people just to get told to come back at 12pm. Fine, we thought and off we went for a coffee. Good citizens as we are, no one absconded, we went back for 12 o'clock. Fifteen minutes later a nice lady informed us that we weren't needed today, very sorry, but should return Wednesday (today) at 10am. Great! Time well spent.

So we all met again this morning, hoping to be getting on with whatever we were waiting for, and we were actually taken to the courtroom. Wow! They explained everything, the whole procedure, and guess what, sent us away for a coffee again! Please be back for 12pm. So off we went again. Hoping the case would go ahead now, we all gathered again in the jury room at requested time, only to be told there had been a technical problem and we should get some lunch and return at 2pm. Can you image that not everyone was very happy about this? Finally, after this unvolunary break the moment had come to learn who out of this 37 people was actually going to be on the jury (that still wasn't clear). All names got thrown into a bowl and an important looking person chose 15 jurors. I wasn't one of the lucky, or rather unlucky ones to get picked, and we were 'released'. Seemingly this happens all the time. I just hope that it will be a very long time before I have to do it again. If at all.

Time for some sewing again, yipee!
Posted by Nicole 4 comments 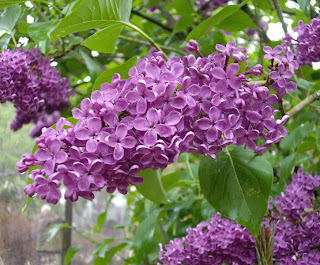 We've been away for a few days to my mum. Leoni was off school with in-service days and public holiday, so we flew out to Germany last Friday and came back yesterday. My mum didn't know we were coming, so you can imagine her face when she saw us standing in her garden! We had a lovely time together.

I've got three craft fairs coming up before the end of June and I have to finish a lot of stuff that's already been cut out, therefor it will be a bit quieter here over the next weeks...
Posted by Nicole 2 comments

Nicole
Dundee, United Kingdom
I am originally from Germany and came to Scotland in 2003. I am happily married and have one beautiful daughter. And I love to sew and everything that has to do with fabrics! This blog is all about my sewing projects, ideas, thoughts, photos and more.

Sewing workshops at Dots n Stripes in Dundee. From absolute beginners who have never used a sewing machine to more advanced sewers who would like to try out new things. To download the programme click here. If you need any further information please contact me on 01382 813132.